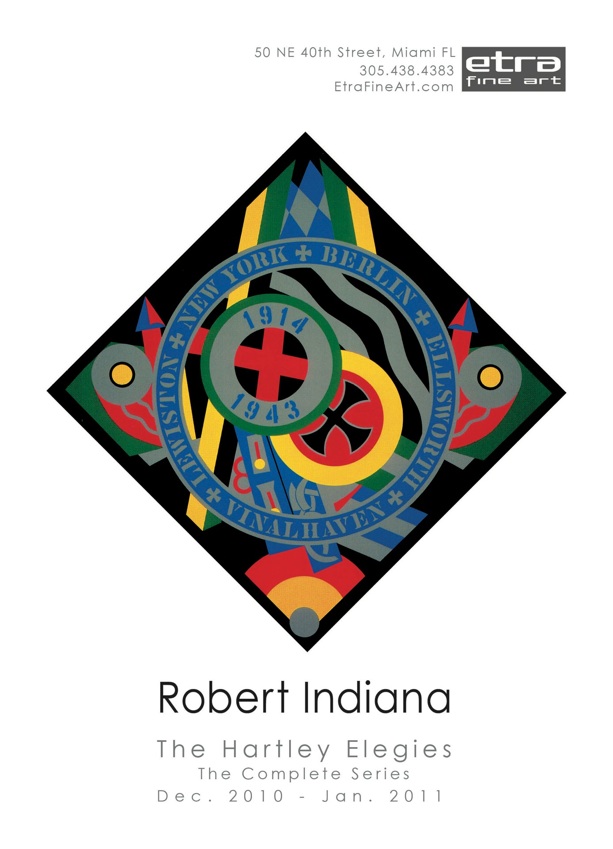 The Hartley Elegies consist of 10
large-scale prints created by Robert Indiana in admiration of American
modernist painter and poet Marsden Hartley. These pieces are often
considered the most powerful and successful works he ever produced.
Indiana views them as his most personal because they reflect not only
his identity, but also that of his idol Marsden Hartley.

The imagery in Robert
Indiana’s The Hartley Elegies is drawn straight from Hartley’s 1914-15
“German Officer” paintings. They encompass symbolism from Hartley’s
paintings, as well as Indiana’s, into an anomalous hard-edged style.
Critics and scholars agree that The Hartley Elegies are one of the most
compelling and substantial works of art ever created by Robert Indiana.

In Liz K. Sheehan’s
catalogue essay, “Robert Indiana: Painter of Signs” she writes, “the
Elegies cement and celebrate the numerous connections between two men,
their lives and artistic achievements, and honor one of Maine’s most
celebrated artists. The full suite of ten serigraphs, reproduced
together for the first time in this volume, is one of Indiana’s most
complex projects. Robert Indiana’s signs point us toward a broader
understanding of Marsden Hartley’s work and the inspiration it holds for
contemporary artists, who continue to find relevance in its depths.”

Robert Clark adopted the
name Indiana as a tribute to his home state. After receiving a degree
from the Art Institute of Chicago in 1953 and a traveling fellowship to
Europe, he moved to New York City.  He became part of an artist
community that included Ellsworth Kelly and Jack Youngerman, and began
to experiment in geometric pop art styles.

Although he came to
prominence during the 1960’s, his concerns have always differed greatly
from those of his contemporaries. Whereas the general pop movement took
interest in the mass media and trappings of consumer culture, Indiana
was drawn to Americana and national and cultural identity.  Indiana now
lives in Vinelhaven, Maine – the same town that Marsden Hartley once
worked.