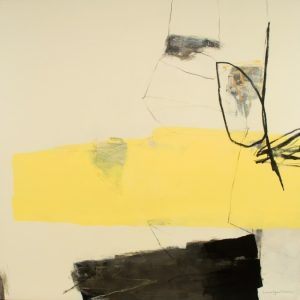 The Utah Division of Arts & Museums announced March 10, 2015, the award of a $10,000 Fellowship for Visual Arts Excellence to Hyunmee Lee.

Juror Cameron Martin, a visual artist from Brooklyn, New York, whose works have been shown internationally, said of his selection: “Hyunmee Lee’s work is predicated on the act of extemporaneous gesture as an evocation of affect. Influenced by Taoism and Buddhism, she is concerned with principles of immediacy, harmony, balance and connectedness.

“Her painted compositions are at times playful and at others filled with pathos. The paintings adroitly situate themselves between multiple traditions of abstraction and work to conjure an emotional realm just outside the confines of language. Her assiduous practice has allowed her to produce work that embodies her intentions with supple dexterity.”

Lee graduated Hongik University in 1985 having majored in painting. She moved to Australia where she spent six years and earned two post-graduate degrees, including her MFA at the Sydney College of Arts, University of Sydney. She returned to Korea for seven years, teaching at Hongik University and exhibiting in major art museums and galleries.

In 1997 Lee came to America; settled in Utah and joined the faculty at Utah Valley University in 2001. She had solo shows at Orem’s Woodbury Art Museum in 2002; at the Nora Eccles Harrison Museum in Logan in 2005; a show of large-scale works at the Utah Museum of Fine Arts in 2006. After receiving tenure at Utah Valley University, Lee retired in 2009 and concentrated more fully on her art. She is working with established galleries across the country.