Closing of 2501 Miami Series in conjunction with "Artists Open"

Join us for a great day for Miami's art scene: the inaugural edition of Artists Open, the first ever Miami-Dade County-wide open 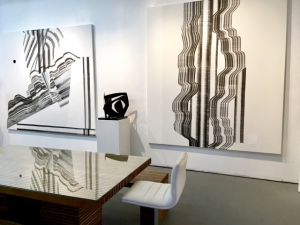 Join us for a great day for Miami’s art scene: the inaugural edition of Artists Open, the first ever Miami-Dade County-wide open studios day.

Initiated by Fountainhead and supported by the John S. and James L. Knight Foundation, 16 artists complexes and over 225 artists will open their studios to the public Saturday, May 11, 2019 from 11am to 6pm.

The Fountainhead is on a mission to unite artists and raise awareness of the vast, incredible talent right here in our own backyard.

JACOPO CECCARELLI also known as 2501
Ceccarelli is an Italian artist whose works are visually stunning, diving head first into the essence of line art through his use of monochromatic color schemes that emphasize his technique. Street pieces are elegant and clean making it pop from the usually busy public settings he implements them. The visual impact of his style and the intriguing ambiguity which comes from his use of figureless forms makes Ceccarelli’s art one of the most exciting and recognizable in today’s contemporary art scene.

ABOUT THE MIAMI SERIES of 2501
This particular set of works is visually stunning.
The artist takes the viewer into the essence of pure line art. By using monochromatic color schemes and figureless forms, he emphasizes movement and rhythm. Miami Series paintings are a beautiful metaphor that goes beyond the merely visual language: they are an elegant and creative illustration of a complex and subtle musical composition.

ABOUT THE ARTIST
Jacopo Ceccarelli, also known as 2501 (Milan, 1981) is among the most important Italian artists in the international Urban Art scene. The artist has participated in numerous exhibitions and festivals all over the world, showing in prestigious institutions like the Center for Contemporary Art Luigi Pecci in Prato, the Milan Triennale, and the MACRO in Rome. In 2013 he participated in Back 2 Back to Biennale, an official satellite event of the 55th Venice Biennale, and in 2009 he won the Street Art Award at the Metropolis Art Prize 2009 with the video Mask, projected in Times Square, NYC. 2501 began painting at the age of 14 in his hometown of Milan. After living in Sao Paolo, Brazil, where he came in contact with the school of South American graffiti, the artist began experimenting with a range of techniques and materials, combining painting on canvas, mural painting, sculpture, installation, photography, video, and documentary. The Milanese artist’s style is distinct from that of other artists for his sinuous and overwhelming wavy lines that invade the work surface, transforming it and giving it a feeling of movement and three-dimensionality. The work becomes hypnotic, capable of activating the imagination and the interpretation of the observer, conjuring images and possible visions. In order to create this effect, 2501 focuses on the simple chromatic pairing of black and white, at times embellished by the color gold.